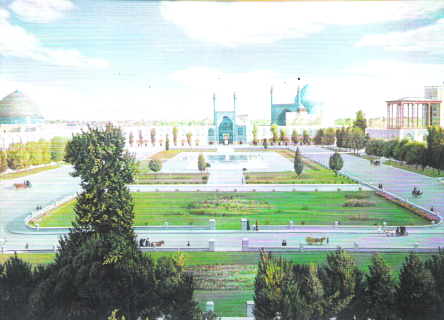 Isfahan has population of 1,755,382 and is Iran's third largest city after Tehran and Mashhad. The cities of Zarrinshahr, Fooladshahr and Najafabad, Se-deh, Shahinshahr, Mobarakeh, Falavarjan and Charmahin all constitute the metropolitan city of Isfahan. Located on the main north–south and east–west routes crossing Iran, and was once one of the largest cities in the world. It flourished from 1050 to 1722, particularly in the 16th century under the Safavid dynasty, when it became the capital of Persia for the second time in its history. Even today, the city retains much of its past glory. It is famous for its Persian–Islamic architecture, with many beautiful boulevards, covered bridges, palaces, mosques, and minarets. This led to the Persian proverb "Esfahān nesf-e- jahān ast" (Isfahan is half of the world).

The Naghsh-e Jahan Square in Isfahan (shown) is one of the largest city squares in the world and an outstanding example of Iranian and Islamic architecture. It has been designated by UNESCO as a World Heritage Site. The city also has a wide variety of historic monuments and is known for the paintings, history and architecture.